Iowa State Fair: Book Recommendations Based on Your Favorite Foods and Activities 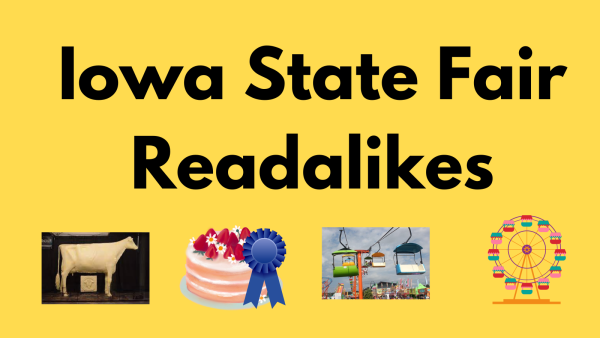 Happy Iowa State Fair Season! To celebrate our Book Chat Librarians made recommendations for books you might like based on your favorite fair foods and activities. Keep reading and let us know on social media which books you will be checking out.

Check out: Kings of B'More by R. Eric Thomas

About the book: With junior year starting in the fall, Harrison feels like he's on the precipice of, well, everything. Standardized testing, college, and the terrifying unknowns and looming pressures of adulthood after that-it's like the future wants to eat him alive. Which is why Harrison is grateful that he and his best friend, Linus, will face these things together. But at the end of a shift at their summer job, Linus invites Harrison to their special spot overlooking the city to deliver devastating news- He's moving out of state at the end of the week.

To keep from completely losing it-and partially inspired by a cheesy movie-night pick by his dad-Harrison plans a send-off la Ferris Bueller's Day Off that's worthy of his favorite person. If they won't be having all the life-expanding experiences they thought they would, Harrison will squeeze them all into their last day together. They end up on a mini road trip, their first Pride, and a rooftop dance party, all while keeping their respective parents, who track them on a family location app, off their trail. Harrison and Linus make a pact to do all the things-big and small-they've been too scared to do. But nothing feels scarier than saying goodbye to someone you love.

Why we picked this book: Kings of B'more represents a whimsical day to be remembered. We liked the idea of pairing it with a spool of cotton candy, riding the ferris wheel, and the giant slide. A day at the fair to laugh and enjoy the moment.

Check out: Lincoln in the Bardo by George Saunders

About the book: February 1862. The Civil War is less than one year old. The fighting has begun in earnest, and the nation has begun to realize it is in for a long, bloody struggle. Meanwhile, President Lincoln's beloved eleven-year-old son, Willie, lies upstairs in the White House, gravely ill. In a matter of days, despite predictions of a recovery, Willie dies and is laid to rest in a Georgetown cemetery. "My poor boy, he was too good for this earth," the president says at the time. "God has called him home." Newspapers report that a grief-stricken Lincoln returned to the crypt several times alone to hold his boy's body. From that seed of historical truth, George Saunders spins an unforgettable story of familial love and loss that breaks free of its realistic, historical framework into a thrilling, supernatural realm both hilarious and terrifying.

Willie Lincoln finds himself in a strange purgatory, where ghosts mingle, gripe, commiserate, quarrel, and enact bizarre acts of penance. Within this transitional state called, in the Tibetan tradition, the bardo, a monumental struggle erupts over young Willie's soul. Lincoln in the Bardo is an astonishing feat of imagination and a bold step forward from one of the most important and influential writers of his generation. Formally daring, generous in spirit, deeply concerned with matters of the heart, it is a testament to fiction's ability to speak honestly and powerfully to the things that really matter to us. Saunders has invented a thrilling new form that deploys a kaleidoscopic, theatrical panorama of voices, living and dead, historical and invented, to ask a timeless, profound question: How do we live and love when we know that everything we love must end?

Why we picked this book: The Iowa State Fair is known for it's place as a campaign stop on the way to the presidency. For our patrons who love to meet political figures we think this fictional story about Abraham Lincoln would be something you might enjoy. The book first released almost a decade ago has become something of a modern classic.

Check out: The Final Revival of Opal and Nev by Dawnie Walton

About the book: An electrifying novel about the meteoric rise of an iconic interracial rock duo in the 1970s, their sensational breakup, and the dark secrets unearthed when they try to reunite decades later for one last tour. Opal is a fiercely independent young woman pushing against the grain in her style and attitude, Afro-punk before that term existed. Coming of age in Detroit, she can't imagine settling for a 9-to-5 job--despite her unusual looks, Opal believes she can be a star. So when the aspiring British singer/songwriter Neville Charles discovers her at a bar's amateur night, she takes him up on his offer to make rock music together for the fledgling Rivington Records.

In early seventies New York City, just as she's finding her niche as part of a flamboyant and funky creative scene, a rival band signed to her label brandishes a Confederate flag at a promotional concert. Opal's bold protest and the violence that ensues set off a chain of events that will not only change the lives of those she loves, but also be a deadly reminder that repercussions are always harsher for women, especially black women, who dare to speak their truth.

Decades later, as Opal considers a 2016 reunion with Nev, music journalist S. Sunny Shelton seizes the chance to curate an oral history about her idols. Sunny thought she knew most of the stories leading up to the cult duo's most politicized chapter. But as her interviews dig deeper, a nasty new allegation from an unexpected source threatens to blow up everything.

Why we picked this book: The Final Revival of Opal and Nev paints an intimate portrait of the lives of two fictional rock icons told in the format of an oral history. Fans of music will not be able to put down this compelling tale, and it gives you a look inside the heads and lives of touring musicians.

Check out: Kitchens of the Great Midwest by J. Ryan Stradal

About the book: Kitchens of the Great Midwest, about a young woman with a once-in-a-generation palate who becomes the iconic chef behind the country's most coveted dinner reservation, is the summer's most hotly-anticipated debut.

When Lars Thorvald's wife, Cynthia, falls in love with wine--and a dashing sommelier--he's left to raise their baby, Eva, on his own. He's determined to pass on his love of food to his daughter--starting with puréed pork shoulder. As Eva grows, she finds her solace and salvation in the flavors of her native Minnesota. From Scandinavian lutefisk to hydroponic chocolate habaneros, each ingredient represents one part of Eva's journey as she becomes the star chef behind a legendary and secretive pop-up supper club, culminating in an opulent and emotional feast that's a testament to her spirit and resilience.

Each chapter in J. Ryan Stradal's startlingly original debut tells the story of a single dish and character, at once capturing the zeitgeist of the Midwest, the rise of foodie culture, and delving into the ways food creates community and a sense of identity. By turns quirky, hilarious, and vividly sensory, Kitchens of the Great Midwest is an unexpected mother-daughter story about the bittersweet nature of life--its missed opportunities and its joyful surprises. It marks the entry of a brilliant new talent.

Why we picked this book: Kitchens of the Great Midwest is all about the celebration of food and taste. Set in the midwest it is the perfect pairing with the Iowa State Fair foodie culture, especially the baking and cooking competitions that have been a part of state fair culture since the beginning.

Check out: Swamplandia by Karen Russell

About the book: From the celebrated twenty-nine-year-old author of the everywhere-heralded short-story collection St. Lucy’s Home for Girls Raised by Wolves (“How I wish these were my own words, instead of the breakneck demon writer Karen Russell’s . . . Run for your life. This girl is on fire”—Los Angeles Times Book Review) comes a blazingly original debut novel that takes us back to the swamps of the Florida Everglades, and introduces us to Ava Bigtree, an unforgettable young heroine.

The Bigtree alligator-wrestling dynasty is in decline, and Swamplandia!, their island home and gator-wrestling theme park, formerly #1 in the region, is swiftly being encroached upon by a fearsome and sophisticated competitor called the World of Darkness. Ava’s mother, the park’s indomitable headliner, has just died; her sister, Ossie, has fallen in love with a spooky character known as the Dredgeman, who may or may not be an actual ghost; and her brilliant big brother, Kiwi, who dreams of becoming a scholar, has just defected to the World of Darkness in a last-ditch effort to keep their family business from going under. Ava’s father, affectionately known as Chief Bigtree, is AWOL; and that leaves Ava, a resourceful but terrified thirteen, to manage ninety-eight gators and the vast, inscrutable landscape of her own grief.

Against a backdrop of hauntingly fecund plant life animated by ancient lizards and lawless hungers, Karen Russell has written an utterly singular novel about a family’s struggle to stay afloat in a world that is inexorably sinking. An arrestingly beautiful and inventive work from a vibrant new voice in fiction.