Hispanic Heritage Month at the Library 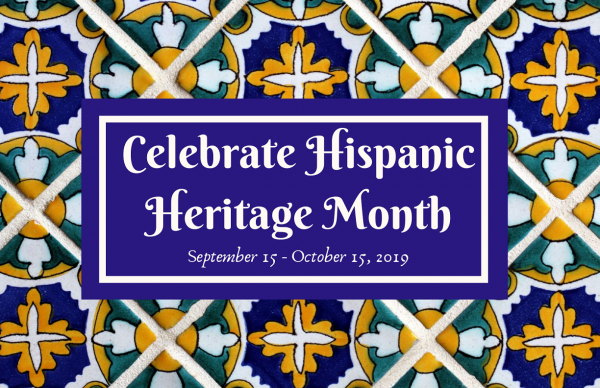 National Hispanic Heritage Month is underway across the country. The month of recognition runs from September 15 to October 15, when people recognize and celebrate the contributions of Hispanic and Latino Americans to the country's history and culture. It began as Hispanic Heritage Week, established by legislation in 1968, and expanded to cover a 30-day period in 1988. National Hispanic Heritage Month begins on September 15 because it is the anniversary of independence for five Latin American countries, while three more celebrate their independence days in the following week.

The Des Moines Public Library will have a big presence at this weekend's Latino Heritage Festival in the Western Gateway Park. The festival is taking place right outside the doors of our Central Library. In the festival's children's tent, located just down the sidewalk from the library's Locust Street entrance, you'll find library staff with some fun crafts and activities. You'll even have the opportunity to design your own bookmark. Then just head up to the library, where we'll have even more crafts and games, and we'll be signing up families for library cards too. We'll have bilingual staff members on-hand to provide assistance and answer questions about our services. 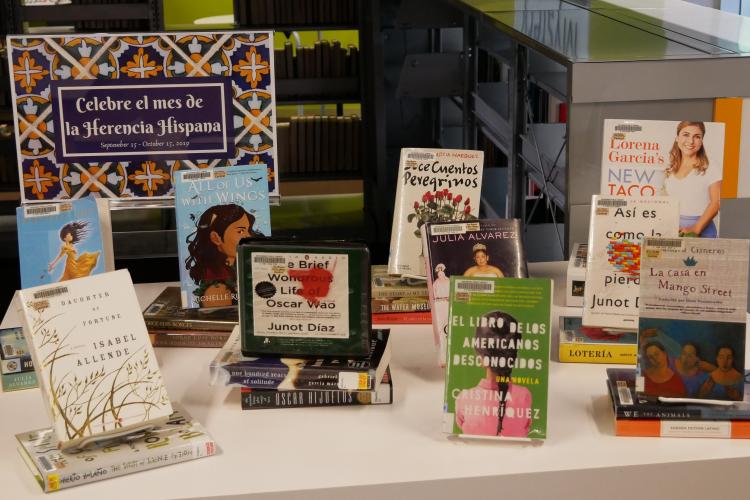 Keep an eye out at our branches as we highlight authors and stories of Hispanic and Latino descent with special displays. This includes several of the Spanish-language novels in our collection! There are a few books in particular that we'd like to highlight:

My Time Among the Whites: Notes from an Unfinished Education, by Jennine Capó Crucet
A first-generation American of Cuban decent, Crucet provides a sharp and candid collection of essays about finding herself a stranger in the country where she was born. With words that are both fearless and slyly humorous, Crucet examines places like a rodeo town in Nebraska, a college campus in upstate New York, and Disney World in Florida, pondering the sometimes hopeful, sometimes deeply flawed ways in which many Americans have learned to adapt and exist.

Dominicana, by Angie Cruz
A teenager in the Dominican countryside, Ana Cancion never imagined herself moving to America. Yet that's what she finds herself doing in 1965, leaving everything behind with a man she doesn't love to move to New York City. She hopes to help her family eventually immigrate, but finds herself trapped in this relationship - until a side of America she didn't see coming promises a different kind of life. With bright, musical prose, Dominicana is a vital portrait of the immigrant experience in a timeless coming-of-age story.

Ordinary Girls, by Jaquira Díaz
Jaquira Díaz grew up in housing projects in Puerto Rico and Miami Beach, caught between extremes. Her family split apart, her mother battled schizophrenia, and though she loved and celebrated her Puerto Rican culture, she couldn't' find support for her burgeoning sexual identity. With raw, refreshing honesty, Díaz tells of her way out of despair toward love and hope, providing a vivid portrait of life lived in and beyond Puerto Rico and its complicated history.

In the Dream House, by Carmen María Machado
At the center of this memoir is a chronicle of an abusive relationship and a dissection of the mechanisms and cultural representations of psychological abuse. Through that struggle, Machado builds a wholly unique structure, where each chapter is driven by its own narrative trope - a haunted house, a coming-of-age story - that examines events from different angles. The tough narrative is leavened with charismatic wit and playfulness, creating a wrenching yet riveting book.

All of Us with Wings, by Michelle Ruiz Keil
Keil's wonderful paranormal novel centers on a Mexican-American runaway teenager living in San Francisco. 17-year-old Xochi never expected to fall into a position where she felt comfortable. Yet here she was, with Pallas, a preteen, and her wealthy, rock star family, living in a Victorian mansion. One night, Xochi and Pallas perform a riot-grrl ritual in good fun - but accidently summon ancient creatures. Now those creatures are out to exact vengeance for the wrongs against Xochi, and neither her new or old families are safe.

We also have a few upcoming programs as part of our month-long celebration: 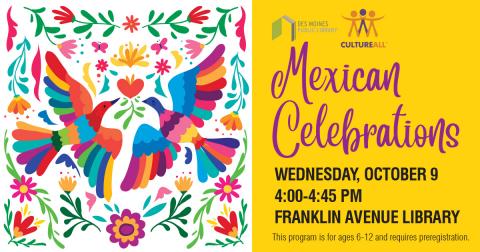 Latina Legacy Program
Wednesday, October 9, 6:00 PM, East Side Library
Join us for a community-led event celebrating the legacy of Latinas in Iowa. We will feature speakers and music to honor Latina legacies. There will also be featured book displays, each dedicated to an Latina Iowan that has left a legacy for future generations. Appetizers and refreshments will be served. The program will be conducted in English and is free and open to all ages.

Bilingual Storytimes
Tuesdays, 6:00 PM, Forest Avenue Library, and Thursdays, 6:30 PM, East Side Library
During these programs, families are led in stories, rhymes, and songs in both English and Spanish. The Forest Avenue Library also hosts one bilingual storytime on Saturday once a month at 10:15 AM, and the East Side Library frequently has bilingual crafts, games and activities. Check out our events calendar for more information.