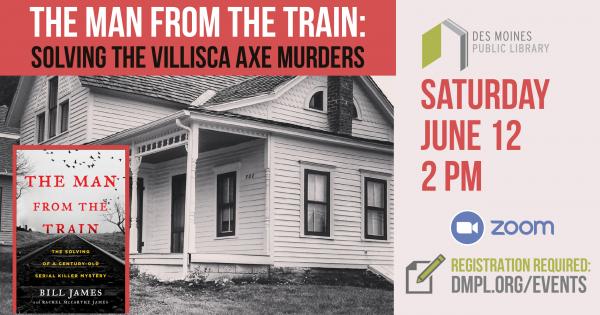 REGISTER for Rachel McCarthy James' author event on Saturday, June 12, at 2:00 PM. The event will also be available online beginning Monday, June 14, and will be available through Sunday, July 11.

In the early 20th century, a series of families were murdered over the course of nearly two decades, including the infamous Villisca Axe Murders. Many theories have abounded over the years, but a 2017 true crime book connects the dots - and proposes a theory that the murders were all committed by one person, making this man one of the most prolific serial killers in history.

Rachel McCarthy James, co-author of The Man From the Train, joins The DMPL Podcast today. Together with her father Bill James (of baseball analytics fame), they researched this century-old mystery, connecting dots on the string of gruesome crimes. She talks about how her father roped her into becoming a researcher for the novel, the points of agreement and contention they had, and how she tracked down stories and information from rural newspapers that were more than a century old.